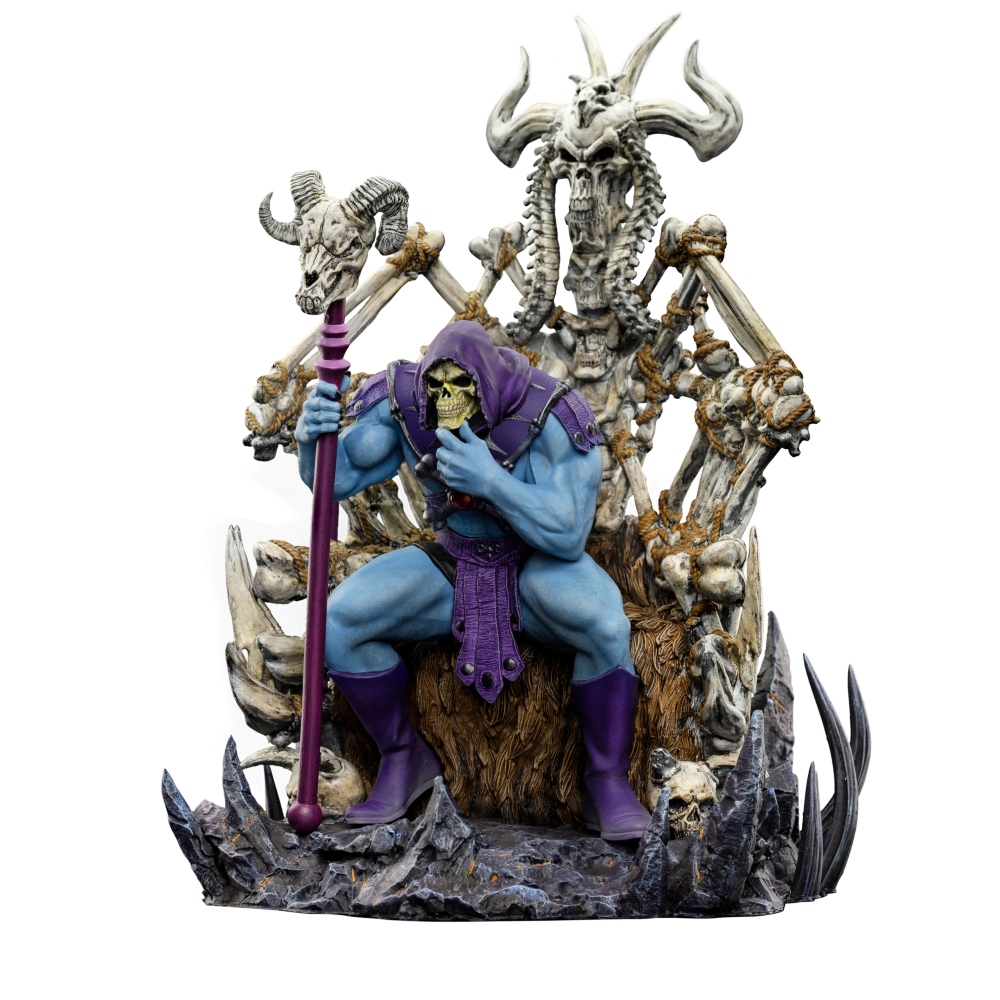 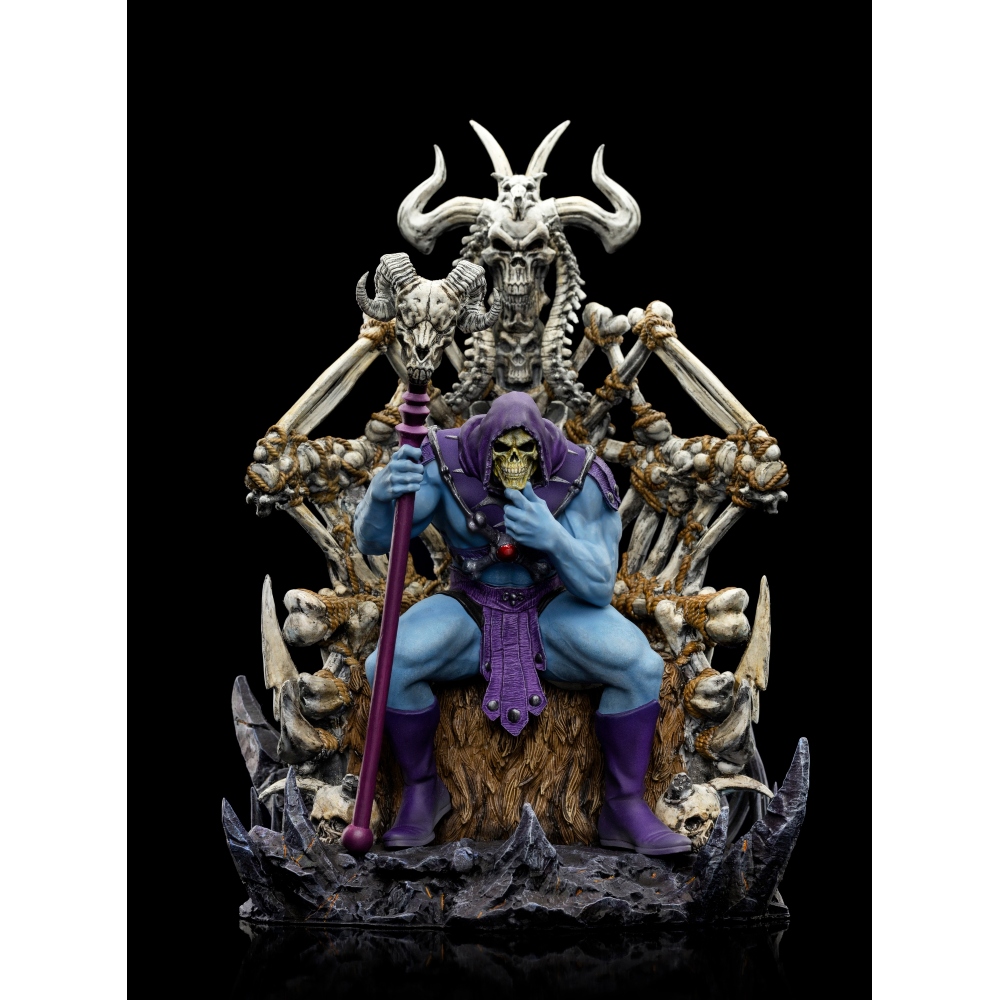 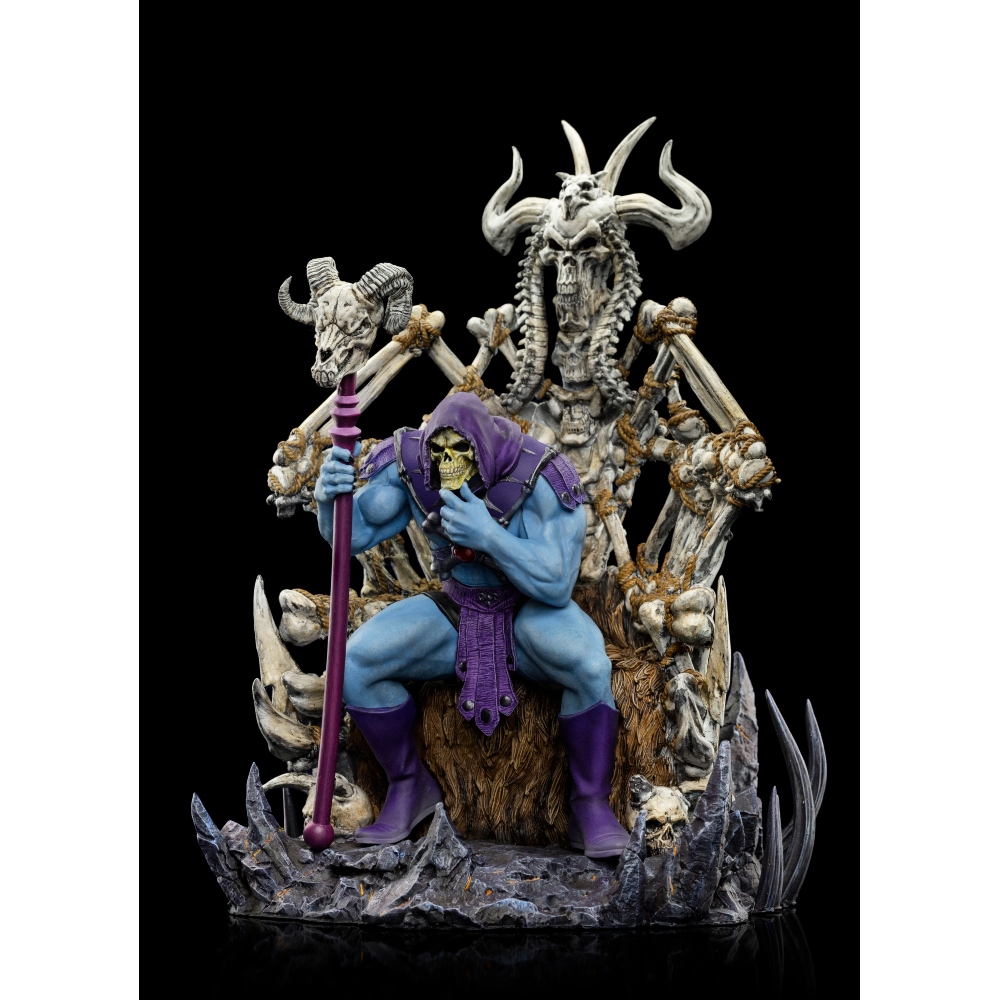 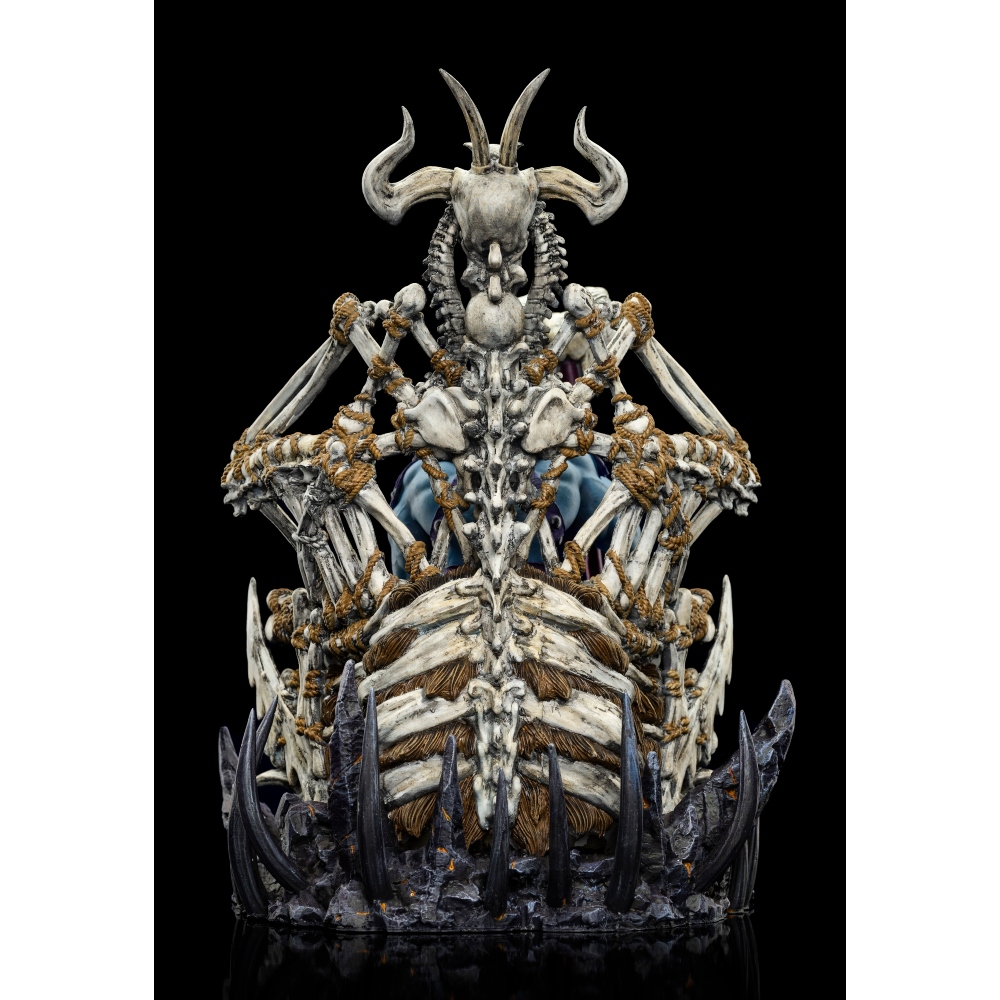 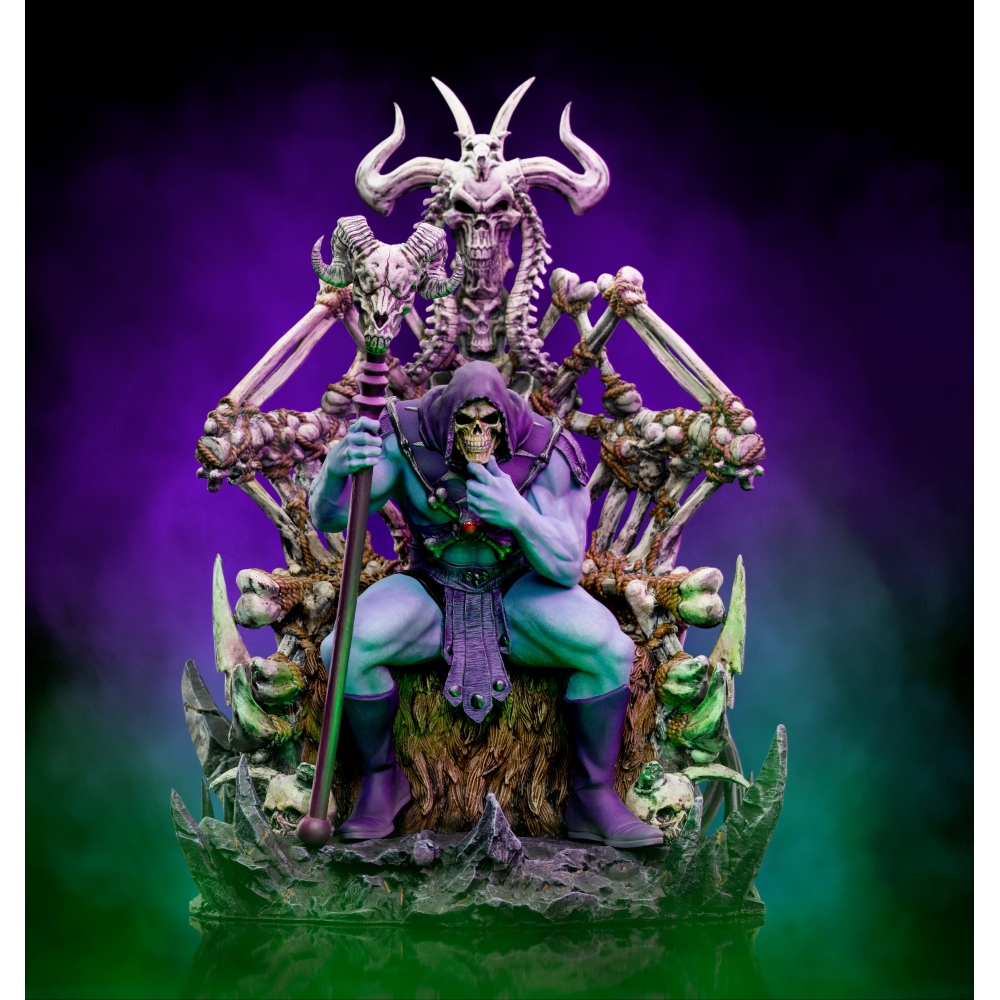 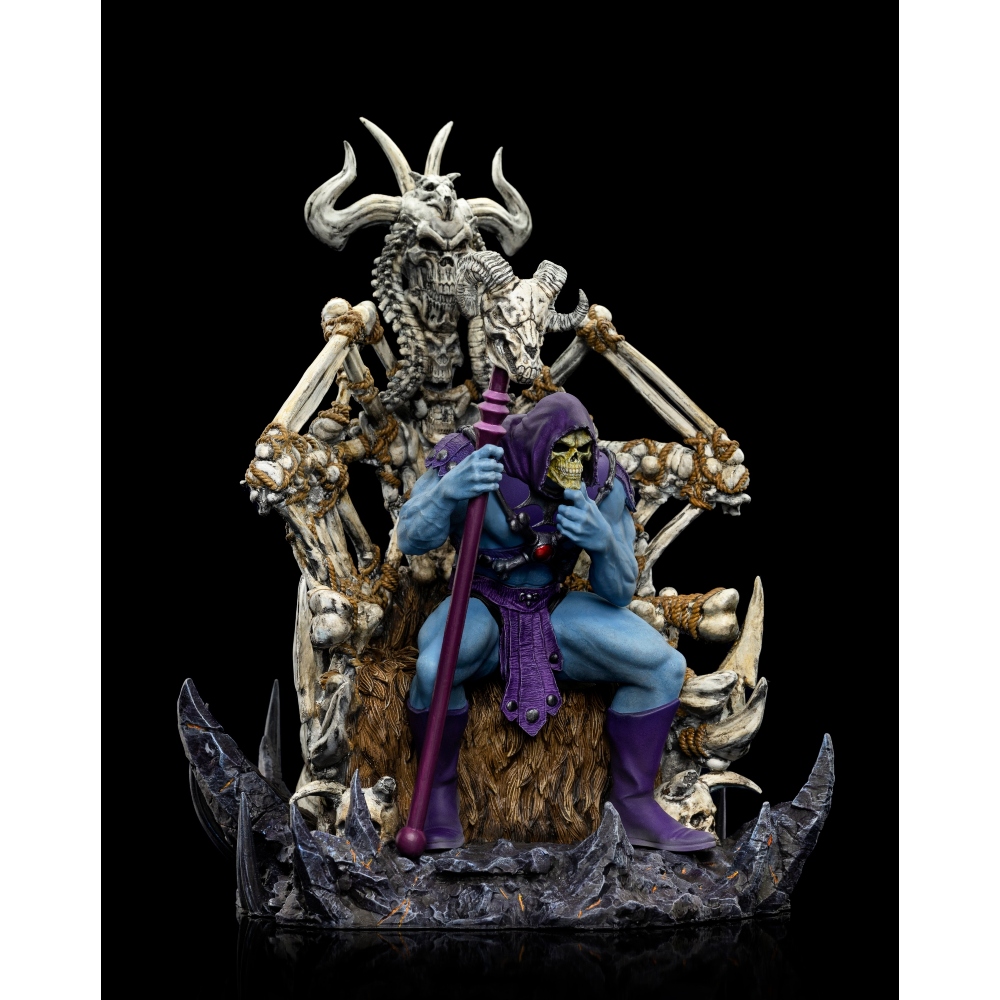 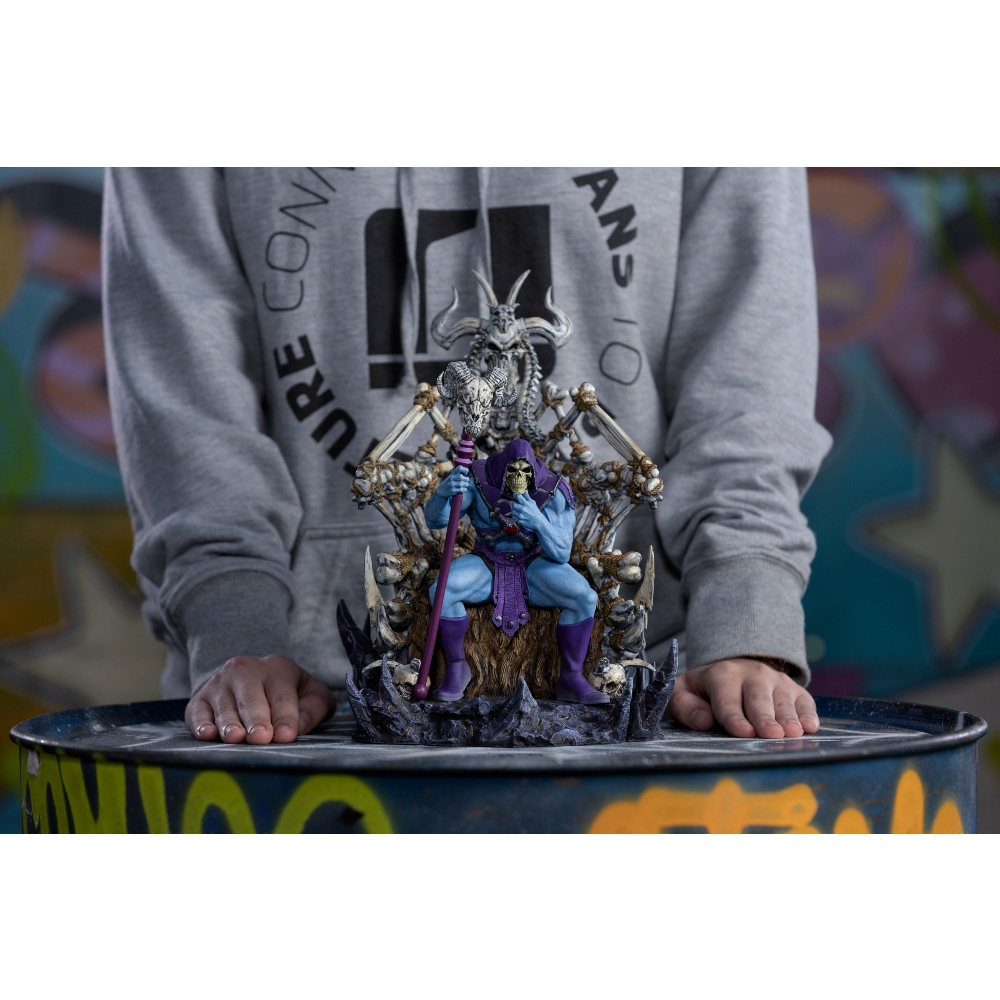 Contemplative in his dark throne, the leader of the Evil Warriors of Eternia plans his next conquest schemes to achieve his greatest purpose: to possess the secrets of the ancient Castle Grayskull and become the master of the universe. Firmly holding his Havoc Staff in his right hand, he watches with his empty eyes while his chin stands on his left hand, thinking such malicious thoughts that would cause even his most loyal followers to tremble. Iron Studios proudly present the statue “Skeletor on Throne Deluxe – Masters of the Universe – Art Scale 1/10”, a luxurious edition, full of details based on the original references.

Member of the Evil Horde and disciple of the malefic Hordak, the villain Skeletor is the main antagonist of the franchise Masters of the Universe, and the most dangerous threat on planet Eternia. An extremely powerful sorcerer, the series suggests that in the past he was Keldor, lost half-brother of King Randor that disappeared in another dimension. Rescued by Hordak, Keldor became a Warlord and attacked the Hall of Wisdom with a group of warriors, where he faced the then Captain Randor and his officers. In a duel against Randor, Keldor threw an acid flask on his opponent, that while blocking it, caused the content of the flask to return and hit Keldor’s face, who was saved by Hordak by transforming his melted face into a skull and making him reborn as Skeletor, that returned to get revenge from the now King Randor and dominate the mystic powers of Castle Grayskull. Establishing his base of operations in the Snake Mountain, the merciless sorcerer controls an army of warriors that serve him on his headquarters and has as his greatest rival the hero He-Man.

Revealed on Inside Iron Studios Day, the Lord of the Snake Mountain and He-Man’s greatest arch-enemy is Iron Studios’ second statue of the MOTU Art Scale 1/10 line to be presented, already available for Pre-Order. Check out, also available for Pre-Order, the statue “Prince Adam – Masters of the Universe – Art Scale 1/10” by Iron Studios with the alter ego of the most powerful man in the universe, and the Toy Art stylized versions “He-Man – MOTU – MiniCo” and \”Skeletor – MOTU – MiniCo”. Soon more Master of the Universe news by Iron Studios.